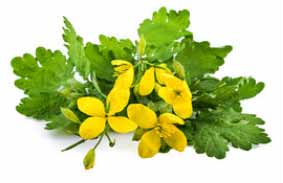 Chelidonium in veterinary application is a homeopathic remedy that has an affinity to the liver and bile duct and can be helpful in treating pets with Liver and Gallbladder Disease, though it should not be chosen over a constitutional remedy if one is known. If the constitutional has not been ascertained and the remedy picture fits the animals condition, Chelidonium could very well be used to help an animal through a crisis.

Jaundice (yellowing of the skin and eyes) is prominent with Chelidonium. There is swelling of the liver and pain, but the pain is characteristically felt in the back, under the caudal angle of the scapula (shoulder), particularly on the right side and goes through the chest. Pain in the stomach is temporarily relieved by eating, especially warm food and drink.

The tongue is swollen, showing the imprint of the teeth around the edges, and the nose holes may flap independent of respiration. Stools are yellow, pasty, clay-colored and may resemble sheep droppings. There is a lack of thirst and a desire for cool air, and the animal will appear lethargic, weak and fatigued.

Chelidonium's almost specific effect on the liver has resulted in its being used as an organ-specific remedy. In low potency, Chelidonium is likely to have a beneficial effect on almost any liver disease.

Modalities:
> Better: After dinner; from hot drinks, from pressure; from warm food; during dinner; and bending backward.
< Worse: From change of weather; from motion; from touch; from lying on the right side; early in the morning; and 4 A.M. and 4 P.M.