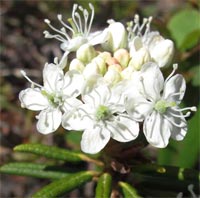 Nothing works better to calm an allergic reaction to flea or mosquito bites.

Ledum has a specific action on hematoma (bleeding under the skin) after a trauma. It works deeper than and follows well after Arnica has been given. It will finish up where Arnica leaves off. If your pet receives a blow to the eye that causes swelling and bleeding, Ledum is great to give before heading to the veterinarian.

It is also the #1 remedy for pressure sores that won't heal. These are seen so often in older dogs and other animals (in people 'bedsores') that lay for long periods of time on concrete or other hard surfaces.

The Ledum type is apt to be discontented and feel cold and chilly and morose. Some authors have described them as 'cross and surly'.

The animal in a Ledum state may be angry and irritable, and may prefer to be left alone (they are as cold emotionally as they are physically).

Ledum is antidoted by: Camphor

For detailed treatment and dosing instruction in veterinary homeopathy, we recommend using Pet Remedy Charts, 'Homeopathy to the Rescue' for dogs, cats, horses or birds.

A homeopathic secret: We feel compelled to share it, but hope you don't need to ever use it... If you ever have a hangover caused by overindulging in hard liquor, it's Ledum 30c or 200c to the rescue! (Nux vomica would be the remedy to use for hangovers from beer.)