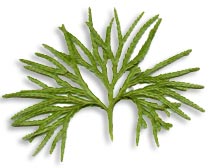 Lycopodium is a homeopathic remedy for pets with Liver disease - Bowel problems - Kidney and Bladder disease. Lycopodium seems to be particularly appropriate if two or more of the below symptoms are present in the animals case. The animal may also have skin involvement with skin ulcers or chronic eczema.

> Better: after midnight, from cold water bathing, in the dark, may improve from being outside in the open air.
< Worse: Worse: from 4-8 p.m. sunlight, wind, being indoors and in the warmth.

In chronic disease Lycopodium may work more beneficially when it follows Sulphur, used before it as a 'clearing' remedy (this should be handled by a professional homeopath).

Source:
The name Lycopodium is from Greek, lykos, wolf, and podus, foot, in reference to the rhizomes which resemble a wolf's paw. The specific name clavatus means club-shaped and refers to the shape of the stems.

The part of the plant employed in homeopathic medicine are minute spores which, as a yellow powder, are shaken out of the kidney-shaped capsules or sporangia growing on the inner side of the bracts covering the fruit spike. The capsules are of such hardness that in the preparation of the remedy, trituration of several days duration is needed, using a special mill, in order to release the soft inner contents.