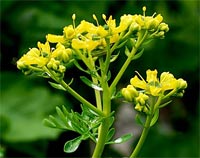 Homeopathic remedy for ANTERIOR CRUCIATE LIGAMENT (ACL) injury in dogs and other species.

Ligament injuries with pain that is often sudden and severe in any animal.

OVEREXERTION AND INJURIES TO, JOINTS-LIGAMENTS-TENDONS

Ruta is similar to Rhus tox. in its application for joint pains and injuries. Homeopathically Ruta has a special affinity with muscles (especially flexor muscles), tendons and the periosteum (the outer layer or 'skin' of bones and the cartilage). Ruta also has similar indications to Arnica, for sprains and other injuries where the area feels deeply bruised. However, the Ruta patient is not as sensitive to touch as those needing Arnica.

The remedy is useful for treating damage to the sheaths of tendons where they insert into the periosteum, and for joint disorders. The wrist (carpal), ankle (tarsal) and knee (stifle) joints all respond particularly well to Ruta.

Symptoms of a knee (stifle) ligament injury are:

If they're not treated at the time, ACL injuries and other types of ligament injuries may act up months or years later. They can make the knee give out when the animal twists or pivots.

> Better: Motion and warmth alleviate. After lying on the back.
< Worse: From cold and wet, in damp weather, resting, sitting, lying down and after effort.

If Ruta grav. is given after Arnica, it will help hasten the curative process in the joints; It can also be used after Symph. in injuries of the bones.

Potency: Depending on the animals susceptibility and the case, 6c, 12c, 30c, 200c,1M are the potencies most commonly used.

Ruta acts specifically on the periosteum and is indicated in any situation where the periosteum has been bruised or subject to trauma. Ruta will help minimise the risk of exostoses developing as well as being of benefit to more chronic cases. Dose: 30c once daily until the reaction has settled down

Ruta will help prevent non-union of a fracture. Dose: one 30c pillule every other day.

What is a Materia Medica? | What Are Keynotes? | How Do You Choose a Remedy? | What are Modalities? | What Are Relationships? | What is a Homeopathic Proving?